After two days and nights of Arabian wonder, we bid goodbye to the wonderful staff at Souq Waqif Hotels, the scorching temperatures, and the nation of Qatar. 🇶🇦 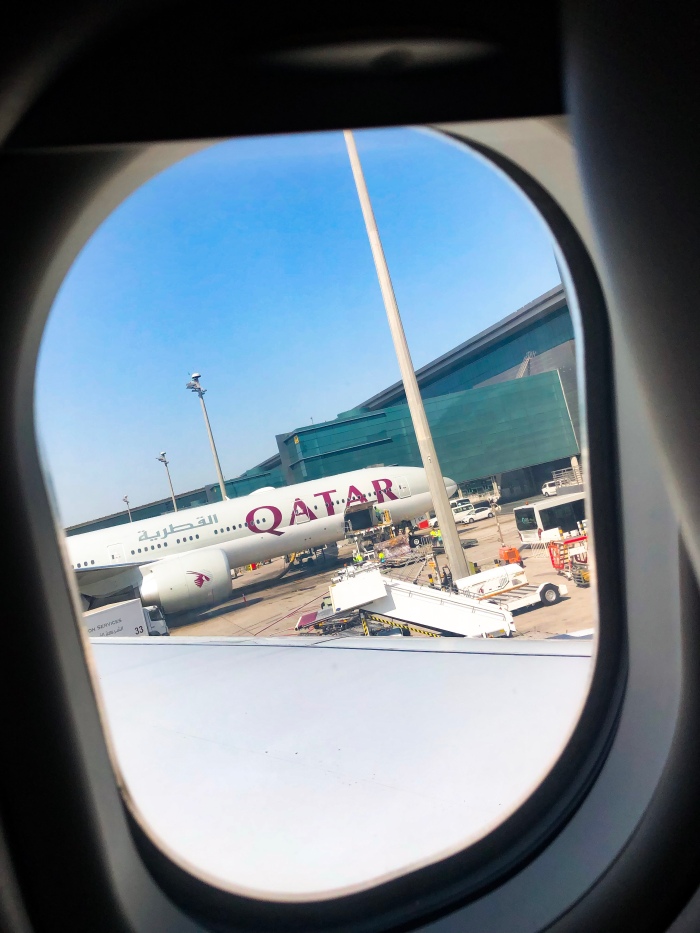 As you land in Kathmandu, even after sunset, you’re forced to appreciate the vast sprawling size of the city. With an estimated population of a little more than 1 million, this metropolis is literally buzzing from the moment you step off the plane and onto the runway [there are no elevated gate walkways here].

Traveling through the city after dark was a particular treat on this night because many of the lights and decorations for Diwali — the Hindu Festival of Lights — were still hanging throughout the city. The colorful dancing of all the strings of lights made me think of the holiday season back home. 52 Days till Christmas! 🎄

We arrived at the beautiful property of the Hyatt Kathmandu, and despite another time change, I think everyone was ready for bed! 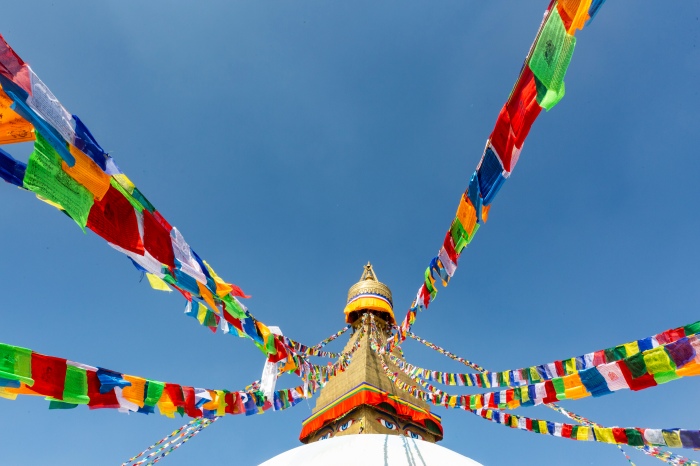 The next morning it was time to get out and explore the city! Our friends at Escape2Nepal have made sure we’re equipped with not only a world class itinerary but also with expert guides like Sohan. As much as I love exploring (and inevitably getting lost) in a new place, it’s incredible to travel with a Nepali guide who knows not only the history and cultural significance of each landmark, but can also speak the local language and navigate the city without needing Google Maps. 😆

A few of us started the day with a visit to Bodhnath, a bustling section of town that houses Asia’s largest stupa. If you’re like me, perhaps you’ve seen images of Bodhnath Stupa in news articles or documentaries about Nepal but have never known exactly what a stupa is. Well, thanks to our guide Sohan (and my much dog-eared copy of the Lonely Planet guidebook on Nepal), I now know a little more about this breathtaking landmark.

As the modern day birthplace of the Buddha, Nepal has a deep connection with the ancient religion – it is the second most practiced in the country after Hinduism – and echoes of Buddhist faith pervade Nepali secular culture as well. A stupa, like the one at Bodhnath, is essentially a holy site, a symbol of the faith and a place for prayer. Early stupas were made to hold relics and ashes of the Buddha, Siddhartha Gautama, and Bodhnath Stupa is the holiest Tibetan Buddhist temple located outside of Tibet. Every element of the construction holds significance:

The square base of the stupa symbolizes earth 🌏

The round dome – water 💦

13 steps represent the steps to enlightenment or nirvana 🙏🏽 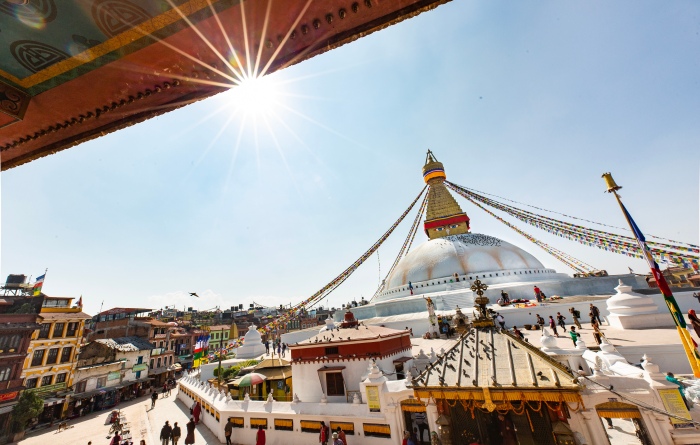 One should always travel around the stupa in a clockwise pattern, and the prayer wheels should also be turned in a clockwise direction. We even paid a small price to have a set of prayer flags hung from the top of the stupa. It is believed that as the breeze blows the flags, the prayers, mantras, and well wishes of those who hang them are sent out over the world. With that in mind I signed mine with peace and love. 💟☮️ 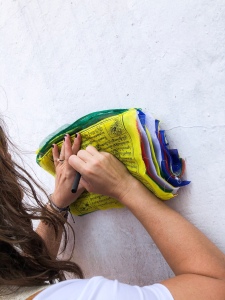 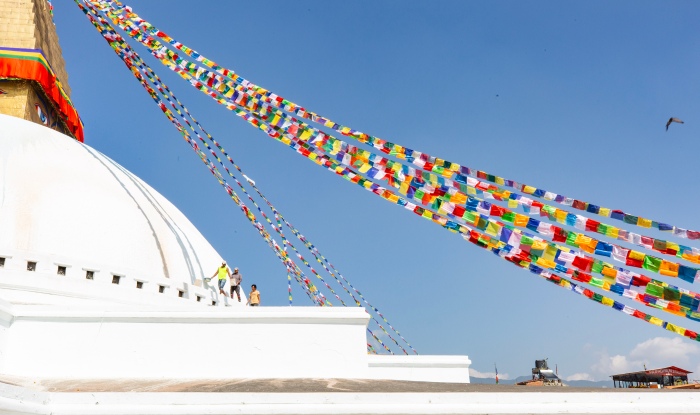 You could spend an entire day reading about the significance and specifics of the stupa, but we have so much more to talk about, so I’ll leave the Bodhnath behind for now.

Our morning also included a brief stop inside Guru Lhakhang Monastary (the cover of my guidebook features an image of the giant prayer wheel here!), 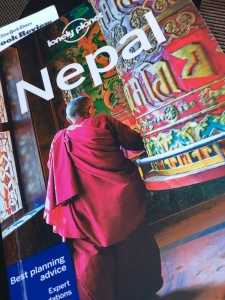 a stroll past the many shops and cafes surrounding the stupa, 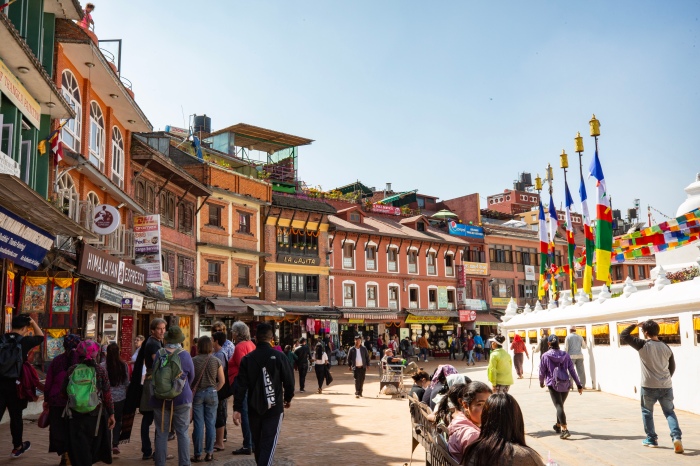 a lesson in thangka paintings at Tushita Heaven Handicrafts (read the 2008 NYT writeup here! — owner Tsonamgel Lama was eager to point out the article printed and displayed under glass in his gallery and seemed absolutely tickled that the paper had referred to him as Mr. Lama), 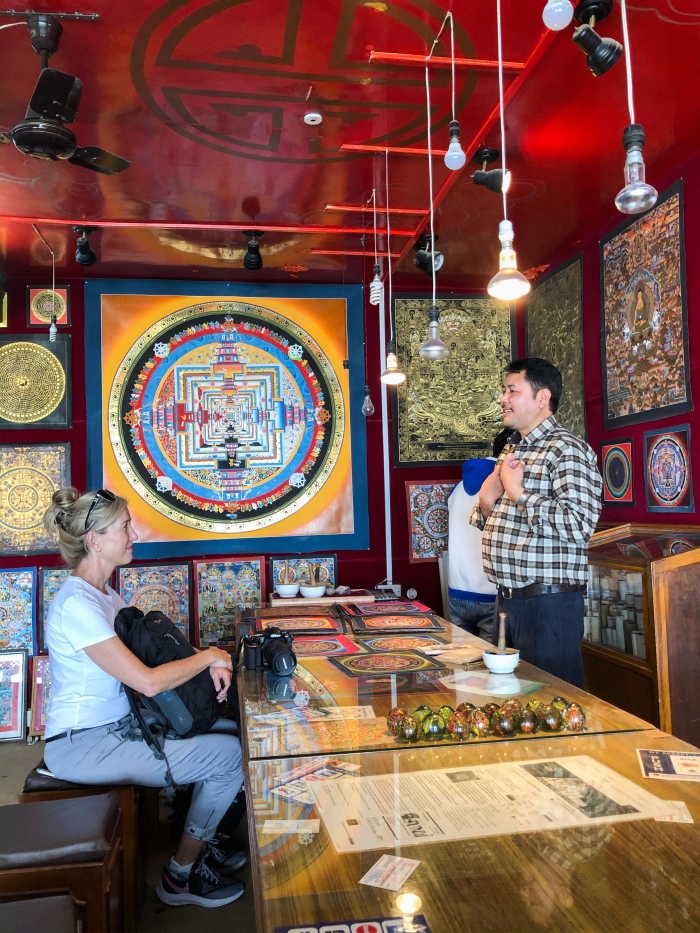 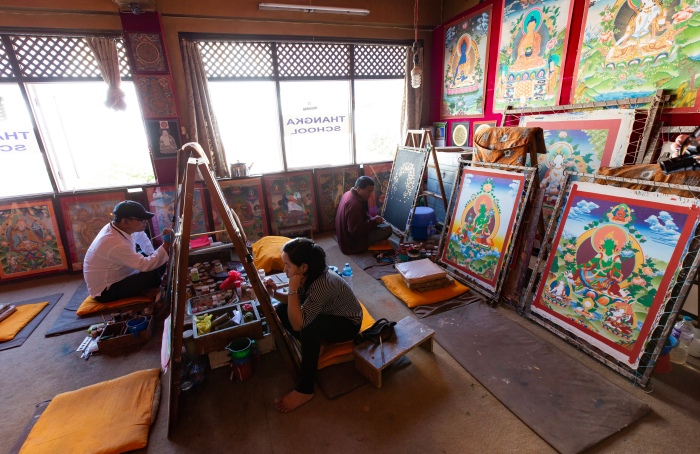 and lunch in one of the many many lovely rooftop restaurants that overlook the stupa.

I’m eager to head back to Bodhnath for more sightseeing and some souvenir shopping later on, but on this day we had to cut our visit short to get back in time for the van ride to our next adventure. 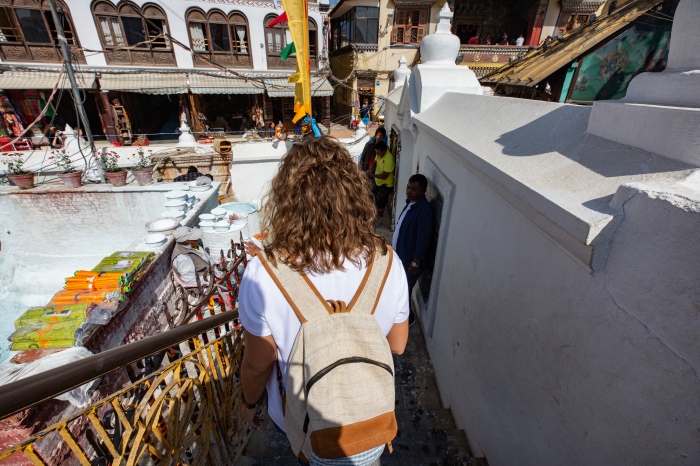 To be continued…. CLICK HERE to read the second half of Day 1 in Nepal!